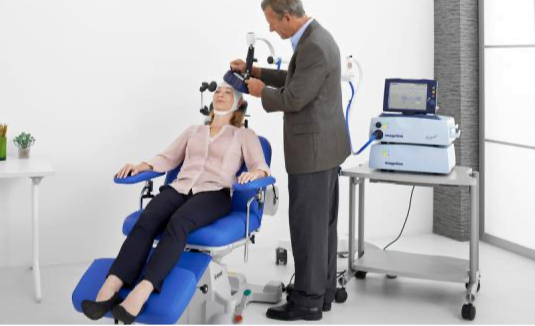 Many individuals who are suffering from severe depression have tried a variety of antidepressants or drugs. Although the medications can aid some people, they are systemically active (circulate throughout the body). This frequently results in unpleasant side effects including weight gain, sexual difficulties, nausea, drowsiness, and dry mouth.

In clinical trials, one in two patients exhibited substantial symptom relief and one in three reported a total cure of their problems.

TMS was recognized by the American Psychiatric Association (APA) in their 2010 Practice Guideline for the Treatment of Patients with Major Depression. These recommendations provide advice on how psychiatrists should treat depression. It’s also an FDA-approved therapy that has shown to be effective in treating patients with severe depression who haven’t responded to antidepressants.

Transcranial magnetic stimulation (TMS) is a non-invasive treatment that does not require sedation. It works by placing an electromagnetic coil over precise locations of the scalp and sending targeted magnetic pulses, comparable to an MRI, into regions of the brain linked with mood control and sadness.

You should be awake throughout the TMS therapy and may resume normal activities immediately after each treatment. This is not the same as electroconvulsive therapy (ECT). You are free to drive yourself to and from the appointment because there are no side effects on alertness or memory.

During the procedure, you will feel the curved device that houses the magnetic coil, resting against your head. You’ll also hear a clicking sound that usually lasts for a few seconds.

TMS is not a one-size-fits-all treatment. Like any therapy, TMS has side effects that vary from person to person. The most typical adverse effect is mild to severe scalp discomfort or pain, which generally fades after the first week of therapy. A TMS-certified psychiatrist will discuss the risks and benefits of treatment with

Most insurers pay for transcranial magnetic stimulation (TMS) treatment. Check with your insurance provider to see whether it’s covered.

Previous ArticleIs Litchi Good for Diabetics? Know about the Top Benefits of Eating Litchi
Next Article When Should I Visit The Podiatrist?